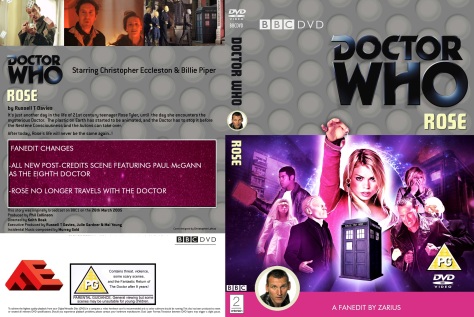 Cast your mind back to 2005…simpler times and simple pleasures. Russel T. Davies re awoken the sleeping giant of science-fiction with a modest and whirl wind reinvention of Doctor Who starring Christopher Eccelston as the Ninth Doctor and Billie Piper as Rose Tyler, who became essentially the show’s quintessential answer to Gwen Stacy…only without the satisfaction of a bridging.

For that first year, many fans questioned where things would go, it would not be until “Dalek” where we learned who was involved in the last great time war (I, being a book nerd, thought they were going to make the recently folded war with Faction Paradox canon to the tv world), other questions were whether or not Adam would turn out to be Davros because of his ‘third eye’ (yes, erratically preposterous fan theories were running rampant even back then), but the most crucial question on everyone’s mind…was what had happened to Paul McGann’s Eighth Doctor?

There didn’t seem to be an answer. Doctor Who Magazine at one point offered to reveal how he came to be Christopher Eccelston with the planned conclusion to their final Eighth Doctor strip adventure “The Flood”, something RTD even encouraged, but the BBC had the final say and did’nt want Eccelston to be glimpsed before transmission, so the idea was quietly dropped and the strip adventure ended on a homage of sorts to “Survival”. I remember being quite vexed at the time about it, as there were still loose ends from that era still to be tied up…though that would be (partially) remedied in later years with the new series Doctors.

We did’nt get a concrete answer until the 50th anniversary, seven years later, in the “Night of the Doctor” minisode, where the Eighth Doctor tries in vain to save someone who despises his race and stays with her ’till the bitter end…only to be given a choice by the Sisterhood of Karn to become a being who could tip the balance in the ongoing time war. He chooses to be a warrior, a Doctor no more…we come to know him as a Doctor of war.

It wasn’t Eccelston though.

In a convoluted fashion that can only come about when a reluctant actor doesn’t want to dip his toes in the same lake twice, Eccelston was replaced in the special by John Hurt, and the special tied up the remainder of RTD’s influence on the show in grandfatherly fashion. Eccelston had to make do with archive footage of him being used in the sequence where all thirteen Doctors save Gallifrey.

Fans opinion was mixed, some did not take to the fact Mcgann was shafted by the 50th and did’nt get to participate in the time war at all, others could not adapt well to the concept that Eccelston was not even the Ninth, but in actuality the tenth incarnation of the time lord, bumping Matt Smith up to the final incarnation. Some thought the lineage of the Doctors had become slightly more complicated than it need be.

Some cried out for simpler times.

Cast your mind back now to 2005, where the Eighth transitions to Nine in just under a few minutes, sit back and enjoy Eccleston’s first adventure all over again…oh, and this time, let’s leave Rose Tyler behind shall we?

“Out of Time” is largely thought of as the last of the “good” outings for the boys from the ‘Dwarf. It was the final episode written by both Rob Grant and Dough Naylor before Grant went on to pursue solo fortunes and Naylor was left with keeping the franchise afloat for as long as it could remain profitable, and it’s an engine that’s been kept running ever since. Whether or not the ship has sprang a few leaks or not is a matter for subjective opinion with the long serving fanbase.

But let’s get back to when one era ended, and how it was resolved with an era about to begin. “Out of Time” began a four year hiatus for the show, and ended in dramatic fashion with the crew seemingly killed by their future selves after a skirmish. It would not be until 1997 where we learned the conveniently convoluted explanation for their ongoing survival in a small pre-titles prelude before beginning an entirely different adventure.

It is with this prelude in mind that I decided to tinker with a minimally different edit of “Out of Time” by taking the series seven epilogue and having it work as linking material to the unedited and complete episode. Lister introduces us to the story as soon as he says “see attached” and chimes back in shortly after Starbug’s destruction to explain everything else.

Better than Air Belgium? I’ll leave that to the subjective opinions of the audience these edits are made for…your fine selves.

By the way, they’re in space.