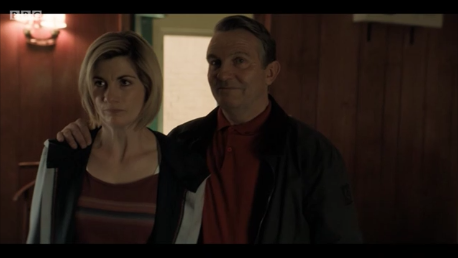 The Doctor couldn’t sleep, thoughts of guilt cut through her slumber, stirring her.

It had been all her fault.

Tzim-Sha Tof the Stenza had come close to wiping out the planet Earth, he had come close to setting himself up above the gods like so many of the could-of-been-kings she’d encountered over the centuries, and had he succeeded she would have the blood of billions on her hands.

All because she told him to go home.

He had arrived on another world, the home of the Uux, and he had manipulated them to serve him in good faith.

Faith was a word that weighed heavily on The Doctor’s mind.

She got up, feeling a chill as the ventilation caused a brief draft in her bedroom. She placed a nightgown across her bare skin and stuck her feet in a pair of pink furry slippers with the face of the Pink Panther on them, and walked out of the bedroom towards the console room.

There, she found Graham was up as well, clutching a hot water bottle and holding it close to his chest.

The Doctor tightened the pull on her robe and crouched down next to the console.

“Yeah, sort of, just thinking a bit. I like thinking, though it can get a bit much” she admitted.

“One shot” said Graham as he stared at the crystalline column, his eyes mesmerised by its tranquil rotation.

“I had one shot at him. Tim Shaw, or however you pronounce his name, I took all my rage, my grief over Grace, over what I lost, and I channelled it into that one moment, and that moment was mercy. I raised above it all Doc. I didn’t shoot myself in the foot, I reserved that for him”

“That was a joke Doc, it was his foot that took the laser bolt” he said, kneeling down and sitting beside her. He sighed.

“Yaz and Ryan, they sleep like babies, so much to live for, and me? I don’t know when my next session with cancer will spring on me. Just because you’re in remission doesn’t mean you’re free, you have to be vigilant every day. It’s always a fight. I wish I could call checkmate on it, on my own terms, but life is rarely as ripe with opportunity as that”

The Doctor nudged him on the shoulder and snatched the water bottle from his grip.

“Trust me Graham, you don’t want to play chess, not on the scale I did” she said.

“There was a time where I didn’t stumble into things, where I was in control of not just my life, but other people’, life was a chess board and I knew all the pawns, they went ahead and took the hits while I protected all the other pieces, trying to make sure the board wasn’t swept clean. I told myself there would only be my hand that would part the red sea, I was proper blasphemous, I saw no need for gods when I could rely on my own reflection, cared so much about preserving order in the universe that I cared little about the chess pieces that bought into chaos…that applied to people that belonged on my side as much as it did for those on the opposing end”

The Doctor gently placed a caring hand on the right side of Graham’s cheek.

“Calling checkmate on my enemies meant forcing my friends to abandon their faith in me. I don’t want you to ever have that power Graham; you have something more precious than friendship…you have family. They may not be of your blood, but they’re bonded by your strength in spirit. Promise me you won’t ever consider a crap shoot with the universe”

Graham put his arms around The Doctor and held her tightly.

“I promise Doc, anything for you, you count me amongst the strongest, and I’ll prove just how durable I can be”

“Thanks” she said, ruffling his hair a bit before springing up.

“Need anything else? You may have cheered me up, but you look like you could do with a bit of a stirring speech yourself” Graham asked.

“No, not really one for speeches unless I’m making them, but you know, I really wouldn’t mind a good bedtime story…you could read me one of my favourites, Ava Twist. Fancy a go?”

Graham nodded and got up himself.

“Your move” he said, offering her his hand.

The Doctor, initially hesitant, eventually relented and placed her hand in his, and they strolled back to The Doctor’s bedroom.