It’s here, the second part of our “Shift Into Zeo” trilogy…the crossover gets well and truly underway here, with the most ambitious PR edit I’ve made yet.

Lord Zedd and Rita put a stop to Gasket’s brain scrambling of Tommy Oliver with a little mind manipulation of their own, while Mondo’s wicked games convince TJ a metallic monstrosity is the spirit of the woods. Tommy and TJ clash as a deadly trap is sprung, can two teams of Rangers tip the balance of power?

Special thanks to SPDGold, aka Lightning Edits for the VFX work on this. Subscribe to his Youtube channel

In 1997, Power Rangers was a series with problems. It’s days as a pop culture megahit were slowly eroding, ratings were in the toilet, and all but the most dedicated fan had abandoned it for shinier new toys. It needed an overhaul. In mid 1997, it got one, with Judd Lynn becoming showrunner and steering the ship steady for the remainder of the year, setting the stage for the series that would salvage the show and keep it on the air all the way through to it’s brief hiatus in 2010.

But now picture a world where it had been decided by the powers that be that Turbo would be the final season? What would that have looked like? Ponder no more as these special edition fanedit remixes offer a visual insight into what the series could have been if the end were in sight.

Here are all the current episodes I have of my Power Rangers Turbo remix project, with all new stories and outcomes created out of existing episodes.

A Drive To Win

Rangers to the Rescue

Clash of the Megazords

Countdown to Destruction Part One

Surprised nobody’s thought of doing this already, or at least have yet to share anything publicly. Taking a few sequences from my recently attained Zyuranger DVDs, I peiced together my version of what the intended ending for Mighty Morphin’ Power Rangers might have looked like before the order came down to increase the episode count for the first season, and from there, season renewals that have lasted more or less ever since.

I’ve put together episodic and feature-length cuts of a hypothetical “series finale” for Power Rangers…basically what would have happened if the show had been cancelled in 1997. Loads of treats in this one, including more cameos from classic Rangers, new cliffhangers, the Rangers get to destroy Dark Spectre, and a ‘new ending’ made up of footage that was frankly always begging to be used in a PR series finale, and would not be out of place in a legit or fan made one!

Here is a fanedit I’ve made of the beginnings of Power Rangers In Space. This edit was originally intended to be the entire In Space story condensed, but as I worked my way through the episodes I realised it was too much of a herculean undertaking that was leaving far too much cut out and a narrative that wasn’t very coherent and not being given time to breath. I’m sure somebody more talented than me can stitch together a more consistent edit in the future.

So to satisfy my determination to see an edit of this through, I looked back to the official Fox Kids omnibus edits of my childhood, and realised that, at least to my knowledge, Power Rangers In Space never had one focused on it’s points of origin, so there lay the challenge. This edit consists of a heavily edited “Chase Into Space” parts one and two, as well as most of In Space’s premiere “From Out of Nowhere” as well as the episode “The Delta Discovery”, this was largely thrown in there to ‘book-end’ the feature with an appearance from Divatox.

A quick edit of “Day of the Dumpster” that includes an introduction to Tommy, setting him up for later in the series. Also rearranged the first two scenes so we’re introduced to the teens first followed by Rita’s release.

Makes use of less controversial fan films like “Rise of the Green Ranger”, “Sentai” and “The Last Ranger”, enjoy.

Recently took the previous cut of this edit to the discord server on SDN Editions…and got some great feedback, including one or two creative suggestions that made me completely re-evaluate what I’d done. One criticism is that the plot seemed ‘all over the place’ (difficult to achieve with jarringly different footage), so I took their suggestions and have put together a new cut. Parts where JDF isn’t available to use I substituted with the guy who played him on Power/Rangers so there is not much consistency with actor continuity during the middle, but I hope that won’t prove a base breaker. Should have the edit up soon. I’ll leave the original up so people can contrast and compare and decide which cut is better. 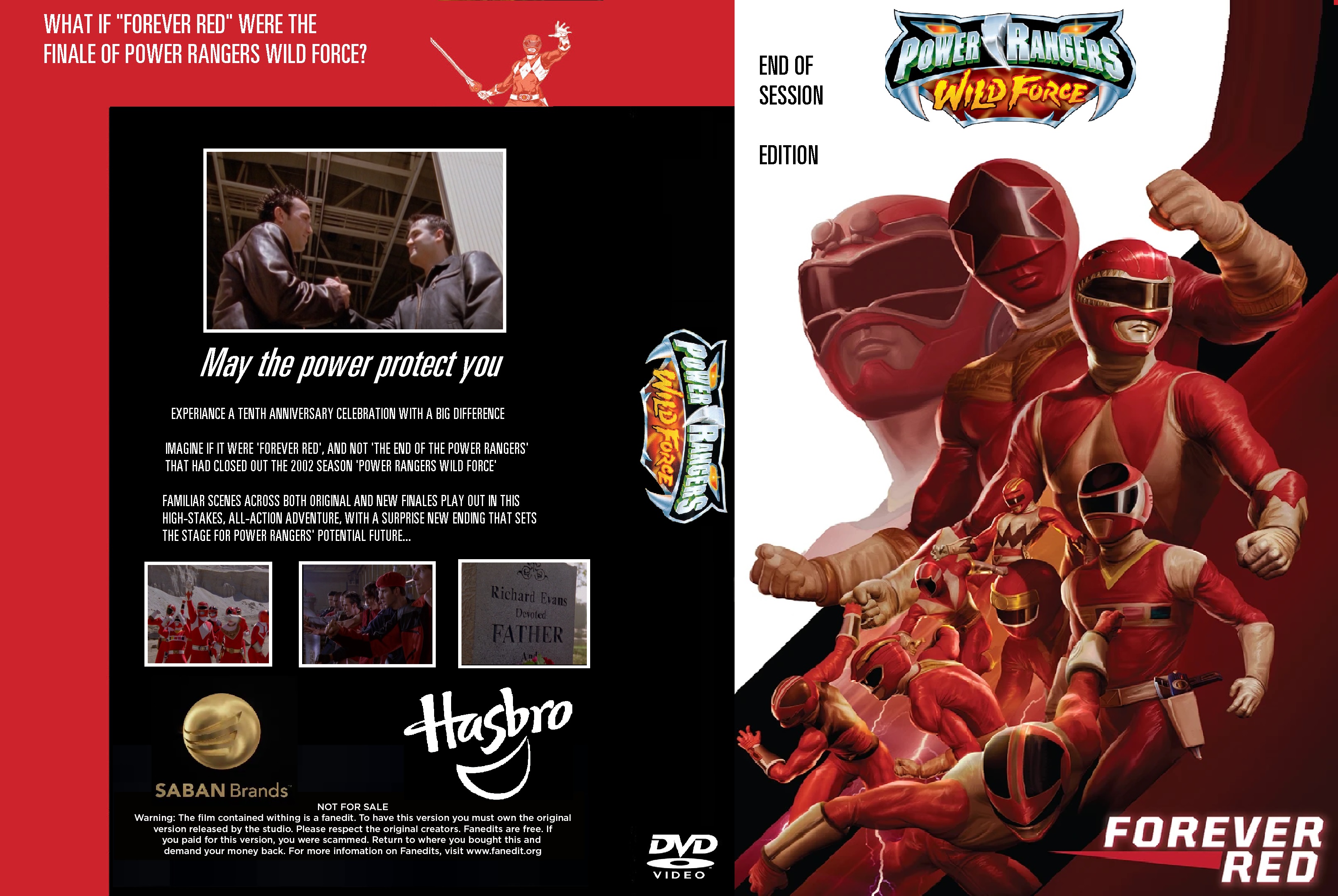 As I continue to edit various Power Rangers episodes,  the one I’ve been most pleased so far with is the one I’ve done for “Forever Red” the 10th anniversary story from 2002. I’ve repurposed it so it now serves not just as a finale to Power Rangers Wild Force (in place of the “Tnd of the Power Rangers” two-parter) but also a prequel to 2009’s Power Rangers RPM, which at the time was intended to be the last season.

Based off a fairly comical Sentai, Turbo took itself far too seriously, the plots often being played straight despite the zanyness of the concpets. It took a showrunner change, a healthy mixture of high stakes storytelling and an embrace of the cheesy lunacy of Carranger, and the sacking of 97% of the established cast in favour of the next generation to create the Turbo season it’s fans fondly remember.

It’s premiere storyline was actually the Turbo movie, and the follow up which started the season proper was the three parter Shift Into Turbo. Many of my ‘fondest’ memories getting into fanediting was trying to repurpose this story as a grand exist stage left for everybody, Zordon, Alpha, Tommy, Kat, Tanya, and Adam. It was ambitious, and it was ultimately a mess.

When remounting projects, you have to take a look at them again and wonder if what you were trying to make up for was worth discarding in the first place? Was there something in Shift Into Turbo that could be spared? The thing about this trilogy is, it that it devotes itself to three essentials…villain and threat, Ranger action, and Zord commercial for the third part. I chose to focus on the Ranger action, on the characters graduation. The wormhole plot is referenced and built upon, but you can just switch to the traditional third part and pretend it’s the second. In this edit, only parts one and two of this story are fused together.

Gone is some of the graduation day preparation, gone is too much time spent on Divatox’s planet, and to the relief of all, there is Bulk and Skull being turned to monkeys. justin still finds his way to the energy plant without homing in on the plight of the chimps, and the reason he’s there is thankfully covered by Zordon.

Turbo’s first half can be salvaged, let’s see if this is more you speed.