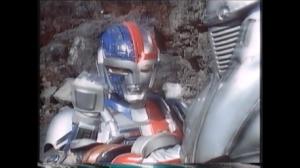 I’m presently searching for some of my old VHS tapes from the 90s, so far I’ve managed to find a couple of old wrestling PPVs, and an old recording from an Easter holiday weekend edition of British morning strand GMTV (1993-2010). What makes this interesting for us is that the following week saw the ITV debut of V.R Troopers (it was already airing on the SKY services, but this was it’s terrestrial tv premiere), so at the very end of this particular morning they ran a small clip from “The Battle Begins Part One” as a taster of what to expect.

Your host for this kids strand is Simon Parkins. Better ( or lesser) known now as a weatherman for ITV Meridian, but who was a fondly remembered face on CBBC television during the Broom Cupboard years.

I’ve uploaded the Troopers promo, as well as an ad for it from earlier in the strand.

Apologies for the slightly loose-in-synch audio

Sideshow Bob decides to creatively meddle with Krusty’s cheaply made superhero show. Bart learns of the online presence for the show and wonders just how far some fans are willing to go to criticize or apologize for the show’s faults and learns what makes a “true” fan. Meanwhile, Lisa takes Ralph in when he decides to skip lunch at School

DISCLAIMER: Thunderbirds are not my property, they are trademarked by ITV.

Alan had been trying to get some decent shut-eye at a fair hour for a week or so, in an attempt to pacify his grandmother and his brothers enough so he could have permission to stay up on the one night of an Ultimate Robot Championship event that weekend.

He had been burning the midnight oil considerably for a few days, staying up well past midnight. This had been the result of several factors, this included lingering adrenaline from the rescue mission involving the solar flare and the rescue of the eccentric operator of the asteroid-based Gulvana station, and the subsequent rescue mission afterwards trying to prevent a pirate radio jockey’s orbiting satellite from crashing down within the vicinity of Barry Island.

Alan was also high on being lavished with praise in both missions. Despite his age, his quick thinking had seen him through tremendous adversity, and had impressed a few cynical adults, and at least one plant, in the process.

The other reasons also included the amount of instantaneous hot beverages Brains had programmed MAX to produce.

It had to go somewhere. And Alan didn’t mind the bitter after taste of the coffee, so long as it picked him up after a tumultuous afternoon, morning, evening, whatever time spent on a daring adventure.

This was one such occasion where his insomnia got the better of him, and he woke up at the 3 AM mark. Worse, he had gone to bed in his regular clothes again, which often annoyed Grandma as she always liked to leave him out a fresh pair of pajamas.

Alan got up and walked over to the kitchen portion of the family lounge area. He poured himself a cup of Mango Orange mix and gulped it down. With MAX safely stored away, there is little chance of him being tempted with another hot mug.

A sudden sound made him turn. He could hear some faint splashing going on from outside. Grabbing a torch light, he wandered outside to the main pool area, aka the launching pad of Thunderbird One.

Bathed in the breath-taking light of the grey moon orbiting Earth, Alan stumbled on Kayo dipping her bare feet into the pool, kicking about and making small waves.

“Hey K, what are you doing up this early?” asked Alan.

“Alan, you startled me” said Kayo, giving him a wave.

“You know, I don’t think anyone’s ever used that pool for anything since we had it installed” Alan joked, “Any time I see someone near it, it’s either to re-arrange the deck chairs, or to clean up the dirt and exhaust left whenever Scott sets out on a mission”.

“Good thing Brains reinforces the windows with special glass that doesn’t shatter as T1’s engines kick in too” said Kayo.

“Someone’s got to keep an eye trained on you, make sure you don’t break your curfew. You want to stay up for that big robot scuffle don’t you?”

“If I were in the mood, I’d rather watch the Zombie festival over on the other premium channels, you know, the Mexican dance of the dead” said Alan, “But I don’t feel like being reminded of my mortality”.

“Really? You? You put such a brave face on everything” said Kayo, surprised at Alan.

“Remember when John’s artificial intelligence ran amok and cut off Thunderbird 5’s communication with the outside world? Millions of call came in for John, calls that went unheeded; you know what I called that? Tuesday. A moment of sheer urgency and there’s pilfering a line from an old Street Fighter movie”.

Kayo giggled, “Guess all those old Nostalgia Critic memes got you curious to see the actual thing?”

“The point is, I was making light of the fact billions of lives from all across the globe were speaking out in fear of their safety. Sometimes I feel I’m not wired right, otherwise I’d know exactly what to say, and it’d be a little straighter than that”.

“You’re a youngster Alan; you’re soaring to heights not seen by many your age, a lot older than you aren’t even equipped to deal with the issues you’ve been struggling with. Comedy puts a brave face on a string of stressful situations. Comedy is often what we use to triumph over a potential or true tragedy”.

Alan sat down next to Kayo on the opposite deck chair and looked up the moon.

“Heard Gordon and Penny were almost a thing this weekend” said Alan, “That’s kind of neat”.

“You’ve done this before whenever you bring up touchy matters like this, you never put your head down like most boys do around women, and you always keep your head up”.

“I don’t know, it’s…stuff I’m just not into. At least…not yet, I don’t know what to make of it, and you’re…well…older. You understand it, just feed me the basics, I’ll just stare at the moon gorgeous”.

Alan was quick to stumble.

“I string sentences together when I don’t mean to, and yes, change the subject please” Alan replied, a little embarrassed now.

“We live in a society where gaps in our ages don’t mean a big deal anymore. If love exists, it finds its way, I think what Gordon and Penelope need is time to sort out what everything means for them, how it clashes with their jobs, and their own ideas about how to spend their time around us”.

“Do you ever wish you could find time for a relationship?” said Alan.

Kayo got up and stared at her reflection in the pool.

“I’m still trying to find the time to be a hero. Thunderbird S has been in the docks for ten weeks, I’ve been as patient as a saint but it seems my windows of opportunity often seem to close, so I try to make do with what chances I do get”.

“And most of the time it’s with me” said Alan.

“You don’t mind that all that much do you?” replied Kayo.

“Nope. With your positive outlook and uplifting speeches, you do top notch repair work whenever fate and chance are determined to deconstruct me”.

“We live in an age that defines character. So long as we stay faithful to who we are, nothing, either well-meaning or mean-spirited, can succeed in assassinating it for the sake of their own selfishness”.

“Is there…is there a thing happening here? You’re kind of coming off a bit strong” said Alan nervously.

Kayo graced him with a generous and alluring smile, her eyes trained on him, she leaned forward.

“As strong as we make one another” she said.

A slight cough interrupted the pair of them. They looked up and saw Grandma Tracey, wearing a light pink nightgown, her arms folded, an eyebrow raised, she shook her head.

“You two better get yourself in bed pronto” cried out Grandma Tracey, “Believe me, I know how things go under a moon as appetizing as that, and I’ll be darned if I see you take that leap before you’re the right age, so get to stepping”.

“What’s she talking about?” asked Alan, “All I said was gorgeous”.

“Sure you did Alan. Pow. Zoom. Straight to the moon” replied Kayo, nudging Alan in the shoulder, picking up her shoes, and walking away.

Alan shrugged his shoulders, stared back at the pale sphere orbiting high above him.

“Any more of that, and the man in the moon would have had company” Alan remarked.

Never waste a good bit of artwork. In my own little head, here’s how I imagine the events of the Final Chapter playing out only if Mayday had been recovered and Peter had’nt been subjected to a leg injury that cost him his career. Alternatively, this could be from any period after Mayday was retrieved by Kane in the two year window between this and Peter’s career ending.